After participating in a Juniper Diabetes Prevention Program and making changes in what they ate and increasing their activity, these two best friends each lost more than 70 pounds. 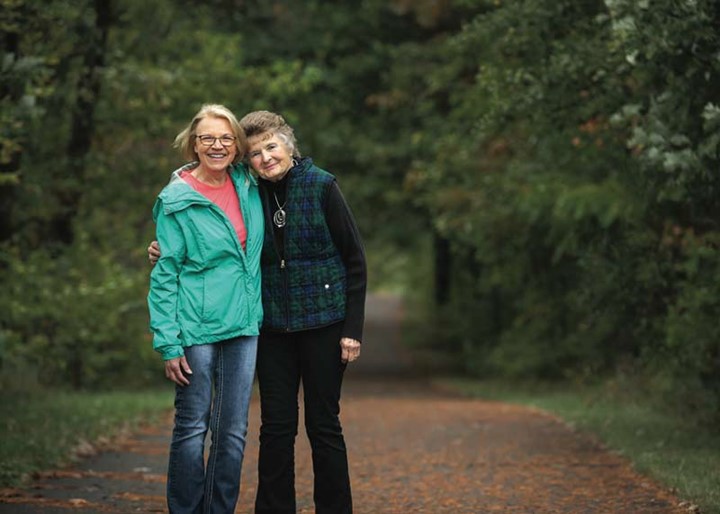 A year ago, Gayle Johnson, 66, of Brainerd was struggling with her weight.

She was also facing a prediabetes diagnosis and had high blood pressure. After seeing an ad for the National Diabetes Prevention Program — a lifestyle change program — in the local paper, she decided it was time to act. She called her longtime friend Phyllis Wikstrom, 71, of Baxter and asked if she’d accompany her on a yearlong journey to better health.

The National Diabetes Prevention Program empowers participants to lose weight, be more active and ultimately prevent prediabetes or type 2 diabetes. Type 2 diabetes raises blood sugar levels and can lead to serious health conditions, such as stroke and blindness. While both genetics and lifestyle contribute to your risk of getting this disease, adopting new healthy habits can significantly reduce your risk.

Crow Wing Energized, a grassroots movement backed by Essentia Health and Crow Wing County, supports the program in the Brainerd lakes area. Crow Wing Energized offered the class as part of the Juniper network, a statewide network that offers a range of evidence-based health promotion classes.

“We’re preventing problems before they happen,” says Kara Schaefer, community health educator for Crow Wing Energized, who also leads the program’s classes. “It’s a proven program that’s split into two sections — core classes for 16 consecutive weeks and then once a month for the remainder of the year. It goes beyond teaching healthy eating and exercise habits. You have a curriculum to encourage group talk and idea-sharing.”

Through Crow Wing Energized, the program is offered free for participants.

Classes include weigh-ins, where participants set incremental, individual goals. When Gayle started the class, she weighed 204 pounds. Throughout the last year, she lost 70 pounds, has cut her blood pressure in half and is no longer prediabetic. She’ll also tell you she’s gained confidence and has become more social, taking up group classes, such as line dancing and Zumba.

Phyllis weighed 217 pounds during her first weigh-in and is down 76 pounds. She explained she was eating healthy before, but was eating too much. Now, she’s tracking — counting calories and sodium with the MyFitnessPal smartphone app and doing 10 miles a day on her recumbent bike.

“It doesn’t take long to track,” Phyllis said. After losing weight, she also eliminated pain in one knee and is enjoying a new wardrobe. “It’s so fun getting back into clothes I haven’t been in forever.”

Reflecting on their experience, both Phyllis and Gayle are glad they signed up.

“The class taught us how to eat and have healthy lifestyles. You just need the mindset that you really want to do it,” Phyllis said. To anyone considering the program, Gayle added, “Just do it. It changes everything.”

This article was first published in the Brainerd Dispatch. Reprinted with permission.

Voices of Participants and Class Leaders

Zoom in for Health and Social Connections

Overcoming Fear of Falling: A Trip You Don’t Want to Take!