Jane Lindsey was a pediatric occupational therapist looking forward to retirement when she was hit with two life-changing events. Her husband, John, was diagnosed with stage 4 bladder cancer and passed away, turning Jane’s world upside down. 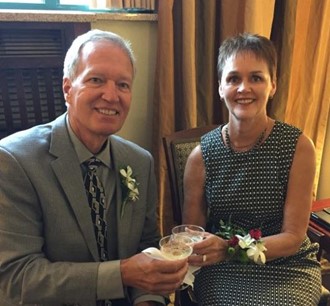 The day after John’s funeral, Jane’s balance was off, and her right arm wasn’t functioning properly. She attributed it to exhaustion and stress, but later found she had suffered a stroke.

Coming back from it all was tough for Jane, but things began to change the day she walked into the Northgate Health Club in Rochester, MN. A chance visit by a Juniper program developer to Jane’s yoga class led to another life-changing event. But this time, there was a positive outcome; an opportunity for Jane to work through her grief with the help of Tai Ji Quan: Moving for Better Balance. “Can I get a volunteer,” the program developer asked. After seeing Jane on the yoga mat, her classmates quickly nominate her to go to the head of the class. When the exercise was complete, the manager asked Jane to become a Tai Ji Quan instructor.

In the aftermath of her stroke, Jane had regained much of her physical abilities, but not all.

Tai Ji Quan was appealing to her because of its meditative exercises, characterized by methodically slow circular and stretching movements. The evidence-based program is known to help older adults improve balance, prevent falls and retain independence. Becoming an instructor would require training and after what she had been through, she felt apprehensive.

Feeling conflicted, Jane sought the advice of family and friends who provided encouragement, leading her to make the decision to move forward. Jane received a grant and headed to the Twin Cities to begin Juniper Tai Ji Quan training. 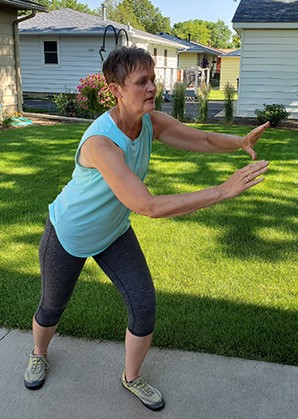 Jane’s first Tai Ji Quan: Moving for Better Balance class kicked off at the Northgate Health Club in February of 2020, the place where Jane says she “found another family.” Feeling nervous and vulnerable, she greeted her students with an open heart, sharing her story of loss and her goal of working on her own balance. “I didn’t want them to feel sorry for me but to know that we’re on this journey together.”

One of the people on the journey with Jane is her student, Helena, a vibrant woman who struggles with balance due to medical issues. Helena moved from yoga to Tai Ji Quan after her Mayo Clinic doctor recommended it. “Yoga was difficult and stressful for me because I have difficulty bending over,” she said. “Now, I no longer have to stand on my head!”

Helena says she feels secure in her movements, especially keeping her balance when moving from right to left. Her posture has also improved. “Tai Ji Quan classes are for people who need to move, but are limited in their ability to move,” says Helena. “We help and support each other, and it’s a social gathering.”

Jane was also successful in helping a student who suffers from hip pain from a motorcycle accident. Jane says, “We worked on his torso, and turning his whole upper body from his hips and torso, instead of just head and shoulders. This movement eases his pain and increases his mobility.” Helena witnessed the change and said, “Jane is a perfect example of what is possible. She had her own medical problems, and she believes in what she’s doing.”

For Jane, Tai Ji Quan is beneficial physically, mentally and emotionally and helps her keep a good life balance. She says that with just eight moves, it’s not overwhelming. “I worked with kids as an occupational therapist, and now, my clients are age 59-86. I hope that they continue to practice, increase their self-confidence and decrease their chances of falling.”

The Northgate Tai Ji Quan class has taken to Zoom for class, amid Covid-19. Because they miss onsite social interaction, students are requesting outdoor socially distanced classes in the park. Jane practices Tai Ji Quan inside and out. “Working out after John died was hard, but good. And, faith, family, and friends are getting me through it.”

Northgate Health Club is one of many Minnesota providers that offer Juniper classes.

Learn more about Tai Ji Quan. Our Juniper specialists are also available to answer your questions by phone. Reach them at 855-215-2174.

Voices of Participants and Class Leaders

Zoom in for Health and Social Connections

Overcoming Fear of Falling: A Trip You Don’t Want to Take!